When writing it is best to think of everything as an argument.  Even if you are writing a history paper or a science report – it might feel like you are just restating facts, but you still want to include evidence and support and make a point, just like an argument. Let’s start with some vocabulary:

In short, you state your point (claim), then back it up with some evidence (support), and add some commentary on that support (warrant).  Let me show you with a test case: 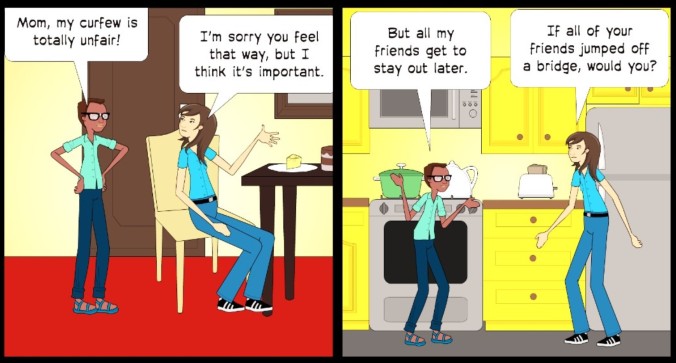 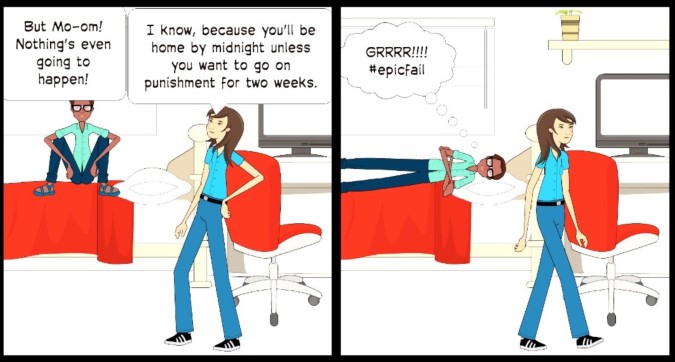 You had a claim, extended curfew, but got sidetracked by argumentative fallacies and lost focus.

Let’s try it again using the Toulmin method.  First, list some of your supporting arguments and how that support connects back to your claim (warrant).

Add a counterclaim:  Hmm, what is Mom going to say that I can refute before she even says it?  Maybe I can come up with something that makes me sound smart, too  . . .

“For the Win” created at wittycomic.com

The same concepts can be applied to other modes of writing such as expository writing (really just a fancy word for explaining).  If you are doing a history report, for example, you should still have a point – like maybe that George Washington didn’t really say “I cannot tell a lie” or that a contributing factor to the Civil War was the instability of the young American government after overextending itself in the Mexican-American War.

Or in science class your lab write-ups talk about how an experiment supported or refuted a hypothesis (claim).  You do that with data (support) and explain HOW that data supports or refutes your hypothesis (warrant).  You might even address other possible variables on the success or failure of the experiment (counterclaim).

While writing certainly requires a lot of code switching, the basics are all the same: treat everything as an argument.

Back to Table of Contents